I don't really believe in being lucky, it's more about being blessed. But since it's St. Patrick's Day this month, I decided to go with the "lucky" theme and make a banner to hang in our dining room. One of these days I may tire of banners, but for now I still love them! 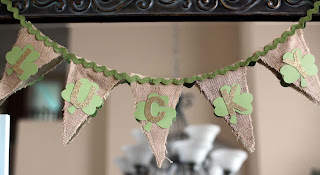 This was a pretty quick & simple project that used a limited number of supplies. 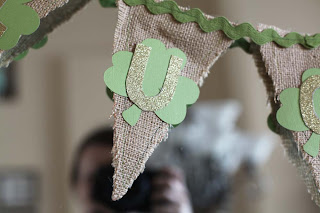 Want to make your own banner?  Here's what I did.

1. Cut 10 triangle banners out of burlap. Then I sewed them together in groups of two so that the pieces had more stability.

2. Used the Cameo to cut out the clover pieces and the gold letters. The gold cardstock was very thick and the Cameo did not cut all the way through the letters. It did cut nice deep lines that I could see well and the cutting was finished off with scissors.

3. The clover pieces were glued to the burlap with Tacky Glue and the gold letters were attached with my Scotch ATG adhesive.

3. For a final touch, I sewed ric rac along the top of the banner pieces.

I don't do much decorating for St. Patrick's Day. Actually, all of my decor is in the photo: a banner and the subway art sign from eighteen25.