Happy Friday to you!

Just wanted to stop in a share a recent layout about glitter toes!  Things are heating up here in AZ and it's definitely sandal weather. After winter with my toes hiding out in socks and shoes it was time to get a pedicure. 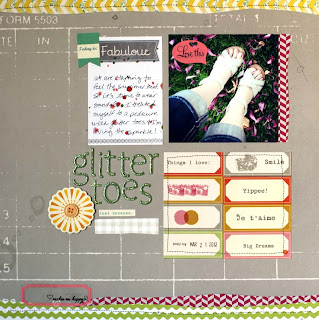 I used another Instagram photo on this page. It's still my favorite app for my phone. It's perfect because I love capturing little pieces of life that would go undocumented without the quick snap of the phone photo. (If you're on Instagram, my username is lisaandrewsaz.) 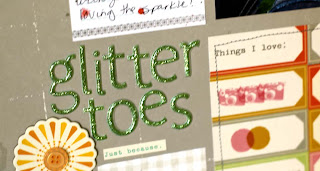 Hope you have a fantastic weekend!

Another week of Project Life is here to share today. This week was pretty simple and it came together faster than any other PL week so far. I have a few other projects that I want to work on this week, so I didn't want to spend a lot of time putting this spread together.

This page is filled with many random bits of paper, sticker and printables that were sitting out on my desk. This project is perfect for using up packages of tags and printable pages.

Lots of good little things going on this week that I was happy to record this week.

Lunch Take-out ///Awards Made by Hannah for her Stuffed Animals 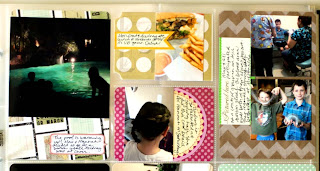 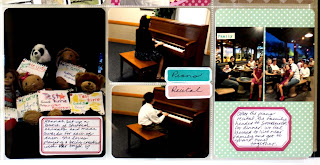 Hope your week is going well!

Even if we wanted to eat out, most nights we are just too busy to even think about that. We have people coming and going and we need to have something ready to eat at home most weeknights. So that means that some meal planning and shopping is a requirement around here.

My husband and I try hard to gather everyone together for family dinner each night so that we have a chance to be together and talk about the day. This doesn't happen very easily when meals aren't planned. 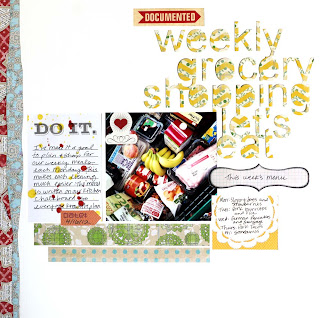 Last week while I was doing the weekly grocery shopping I snapped a photo of the food in the basket with my phone. After loading my photos onto my computer, this photo seemed like a perfect way to record a little slice of our daily life. Got so say I LOVE being able to snap photos on my phone. So many opportunities would be missed without the phone. 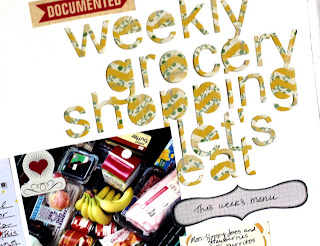 I had some fun with my Cameo on the title. It is definitely one of my favorite toys! I love that I can size fonts and images to the exact size needed for each project. 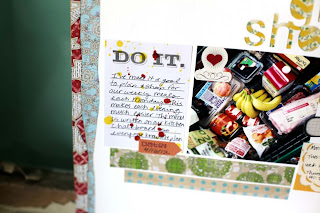 Good luck with your meal planning this week. I'm off to check out my dinner pins on Pinterest to see what we can cook up this week...

Thanks to everyone who entered the {Almost Complete} Daydreamer Kit giveaway this weekend! 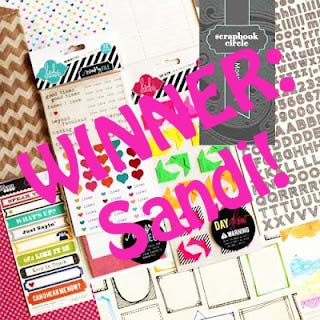 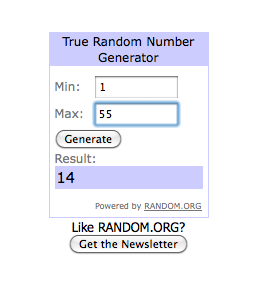 We have Sandi as the winner!

Congrats, Sandi! I'll send you an email and get your shipping info.

Lat Friday I woke up one hour before my alarm and was wide awake. I guess that's what happens when I actually go to bed early (around 11:00 p.m.)

Since there was extra time that morning, it seemed like the perfect time to bake something for my kids' breakfast. It's usually cereal, fruit or bagels, so something baked is a treat.

Pinterest was my first stop for recipe inspiration. This Blueberry Strusel Scone recipe
on my breakfast pins looked promising, so I got to work. I altered the recipe a bit and my version is below. 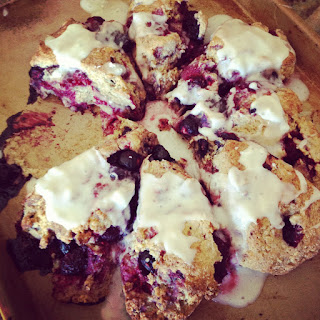 Mix the flours, sugar, baking powder and salt together. Add the butter and mix with the pastry blender.  (Or mix with your hands.) Mix until ingredient are crumbly.

Add in the egg, vanilla and milk. Stir until just combined.

Mix in the berries.

Pour onto a lightly floured surface and knead 6 times.

Place on a baking sheet and pat the dough into a circle and then slice into 8 pieces. Pull the pieces apart slightly so they have more room to grow as they bake.

Prepare the glaze while the scones bake. Mix the powdered sugar and lemon juice together until it is a pretty runny and pourable.

Remove the scones from the oven and allow to cool for at least 5 minutes before pouring the glaze over the scones.

Also, I have to share this Salted Caramel Cheesecake recipe that I made yesterday.  It was amazing. The dolce de leche in the cheesecake + the homemade caramel sauce on the top were perfectly sweet and delicious. 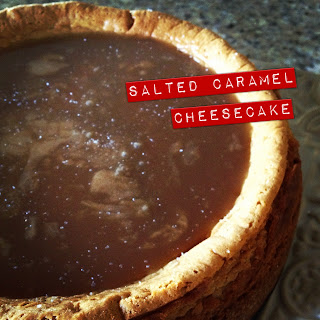 Wishing you a fantastic week!
Posted by Unknown at 2:07 PM 4 comments:

Guess what I found? An almost complete Scrapbook Circle Daydreamer Kit. The kit has sold out, so this is your last chance to get one! It has all of the embellishments and almost all of the paper. I'll sub in some other coordinating paper to make the kit full and fun!

Since I'm wrapping up my Daydreamer projects and moving on to the May Kit, The Story, I want to share this almost complete Daydreamer kit with one of you! 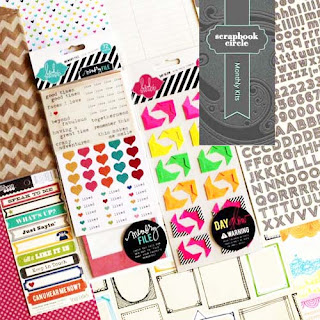 I can't get enough of the bright colors in this kit. 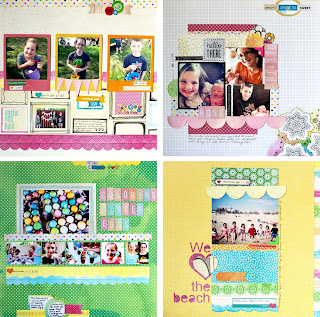 So do you want to win the kit?  Just leave a comment here letting me know one thing you love about spring.

Comments will close this Sunday night.

Enjoy your weekend!
Posted by Unknown at 3:26 PM 55 comments:

This week has been pretty Project Life heavy. I've been busy getting caught up and now I'm current. Feels good to be up to date on the project. 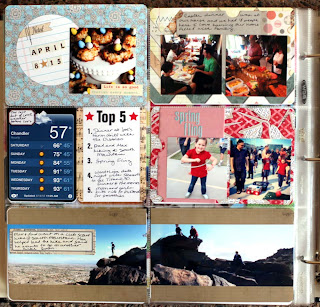 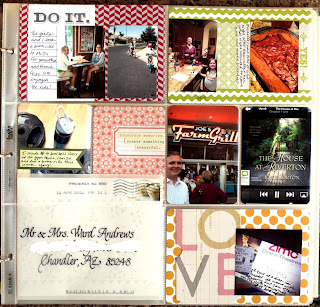 This week also has an insert because I wanted to be sure to include photos of the kids in their new Easter clothes. I just sliced a full page protector so fit these photos. 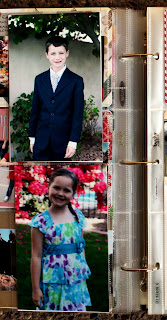 Another great week is wrapped up!

Also, I wanted to share a peek of the upcoming May Scrapbook Circle Kit with you. I'm so excited about this kit! It's available for preorder now. 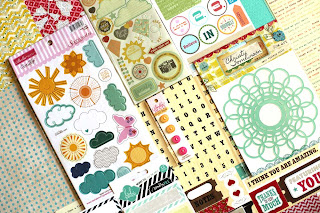 Hope you have a wonderful weekend.
Posted by Unknown at 7:12 AM 2 comments:

Last week we meet for our most recent Pinterest group and made burlap and fabric flowers for a wreath. 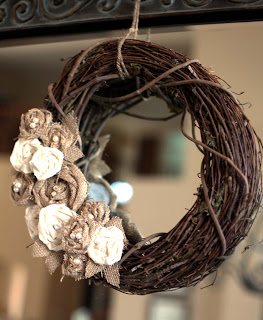 I don't have the source for our inspiration since it was my friend to organize this, but I am grateful for the inspiration because I'm pretty happy with my finished wreath. 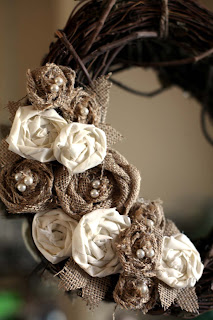 This grapevine wreath has been sitting undecorated in my craft room closet for at least a year, so I was happy to pull it out and pretty it up.

The project was pretty easy, although it did take some time to roll the flowers. We cut 1 inch strips of fabric, tied a knot on one end of the fabric for the flower center and the rolled and hot glued the fabric to small felt circles. Once the flower was to the size I wanted, I would just trim of the rest of the strip and glue the end piece to the back of the flower.

Once a bunch of flowers were made, I cut out a few burlap leaves and arranged and hot glued everything to the wreath. 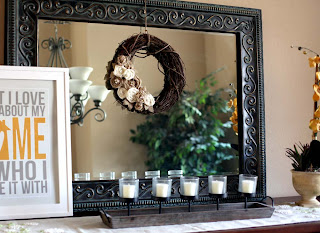 The wreath seemed a little small to hang on our front door, but then the idea struck that it could be hung in the center of a mirror in our dining room. The wreath has a piece of twine tied to the top of it and I just stuck the twine behind the mirror, leaned the mirror back against the wall and luckily it held the wreath.

I get to thank my talented dessert baker sister, Michelle, for the dessert I took to share at Pinterest group. The night before the group, Max called my sister up (after asking me) to see if she wanted to come over and make blondies or brownies with him.  Much to his delight, she came over to bake with him.

Once she was here, we came up with the idea of making both blondies and brownies together.

The bottom layer of the 9 X 13 inch pan is this blondie recipe. The recipe was followed pretty closely with the exception of using salted butter and a full bag of butterscotch chips.

The top layer is a brownie mix. I'm not big on mixes for desserts, but brownies seem to turn out well with a mix or from scratch. The brownie mix was spread all the way across the Blondies, but the Blondie raised quite a bit more than the brownies, so it made a perfectly crisp Blondie crust. 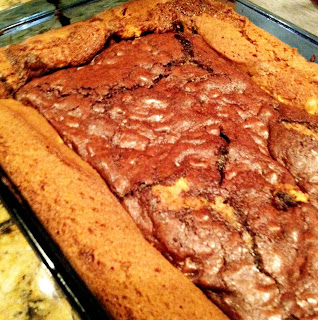 The result was delicious and I'm sure we will make it again. Although it wasn't an idea found on Pinterest, no one at the group seemed to care. 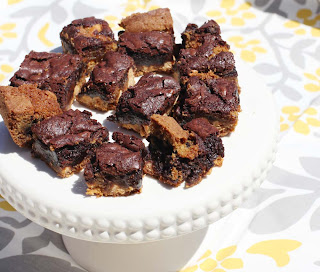 While going thorough some photos I realized that I hadn't shared my Project Life pages from the last week in March. I won't keep you in suspense any longer. :)

I have a pretty good system down now for completing these pages each week so that they don't take too much time, but are still somewhat interesting. 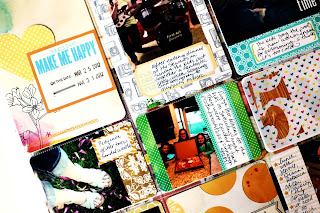 The first thing I do each week is load my photos onto my computer and move all of the photos that might get used on my page to a "print" folder in iPhoto. I keep my favorites in the folder and delete the rest.

Once I see how many photos I'd like to use that week, I flip through the different page protector styles and see which will work best.

I then print my photos and set them out on top of the page protectors white they dry and I get started with collecting paper for the week. 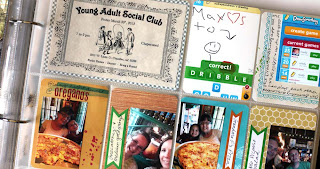 Next I clean out my purse looking for receipts, menus, ticket stubs or anything else that might have been collected during the week. This process has been great for keeping the clutter in my purse under control!

All of the extra bits are used to fill in the holes where there are not any pictures.

I try to leave a couple of blank spaces for journaling or even just some patterned paper so that they entire page isn't covered in photos. 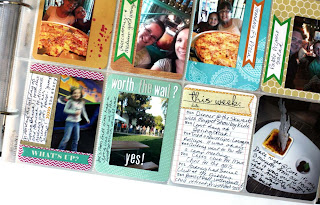 The last step is working my way across the page designing the photo/paper/journaling for each of the pocket. I make an effort to keep it very simple and not to over think or overdo each section.  I'm afraid that if this project starts taking up too much time, I won't like it much anymore.  So the process needs to be simple and fairly quick each week.

It takes a couple of hours from start to finish, but it is rarely done in one sitting. Sometimes I only have time to do a pocket or two, but I just keep chipping away at it each week.

One fun thing I want to note from this week's pages is the two pockets in the upper right hand page that have screenshots from my phone. This week the five of us in our family all really got into playing Draw Something which is an app of the iPhone (maybe it's available for other devices too?) We have enough devices that each of us has our our account and we like to draw pictures and send them to each other. It's been a fun activity to do together.

Thanks for the visit today. Enjoy your day!

Supplies use on this week's pages: